Even though Ford knew that it would have to sell Volvo, it didn't want to sell it without some improvements on the Swedish carmaker lineup and introduced the facelifted XC90 model in 2007.

With a world economy deeply affected by the economic crisis, Ford had to work hard to survive. Moreover, it knew that the crisis effects wouldn't spare the premium vehicles even though it decided to introduce the facelifted XC90 on the market, improving the SUV in most areas.

At the front, the carmaker installed a more visible silver plastic shield on the non-facelifted version. Also, the improved, clear-glass headlights brought a breeze of fresh air to the Swedish SUV. At the back, the taillights received a new design with squared reversing lights lenses and a similar wide plastic shield under the bumper, following the same design language as the front one. While it wasn't a true off-road vehicle and more of s premium SUV based on a sedan platform, the customers appreciated those rugged-looking areas.

Inside, it was the same comfortable, seven-seat vehicle. While the first and middle rows looked better and offered adequate legroom, the last two jump seats in the trunk were suitable only for children.

Under the hood, Volvo offered the XC90 with a choice of three gasoline and three turbo-diesel engines. 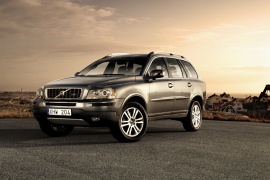