In early 2013, Volvo and Polestar together developed a limited production run of the Volvo V60 called Polestar.

The car was a 350hp high-performance version of the standard Volvo V60, based on the 508hp S60 Polestar Concept from 2012, and was at first developed exclusively for the Australian market as a pilot project. Following the car’s outstanding reception, Volvo and Polestar decided to offer the car in more markets along with the S60 Polestar. In 2014, the S60 and V60 Polestar were available in countries like Canada, the Netherlands, Japan, Sweden, Switzerland, United Kingdom and the USA, with further markets being added next year. 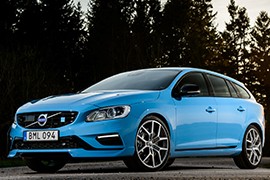 1 "Hot Wheels" Turns Cold Aiming for Nines on the Quarter-Mile, Breaks Diff off the Line

3 Top Carmaker Releases the Chip Announcement Everybody Was Waiting For