Volvo introduced the first generation of the V60 in 2010 under new management after Ford sold it to the Chinese giant Zhejiang Geely Holding Group.

When the new owner stepped in in 2009, the Swedish carmaker already had most of the car developed. It was built on the same P3 platform used by Ford for the Mondeo and Land Rover for the Freelander since 2006. The design and the thinking behind the project were Swedish, and the new Chinese management considered that it had to stay that way. It even promised that the cars built for Europe would be made in Volvo's factory from Torslanda.

At the front, Volvo made a rounded front fascia with tear-shaped headlights swept back and upwards on the front fenders. The carmaker made an ascending beltline ended on the D-pillar at the back of the car. It resembled the look of a shooting-brake but featured four doors. Behind the rear doors, the designers placed narrow windows sloped-down on their upper side. The raked-forward tailgate sported a roof-spoiler, creating a dynamic look for the Swedish station wagon.

For the interior, Volvo chose high-quality materials. It was a premium brand and tried to fit its cars with premium materials, even though the Swedish carmaker carried over some of the switches and buttons from Ford's parts bin. The V60 featured a unique instrument panel with a central speedometer flanked by two screens on its sides and the fuel-level and temperature gauges on the sides. The V60's front bucket seats featured Volvo's patented WHIPS (Whiplash Protection System) headrests, while the 40/20/40 split-folding rear bench extended the trunk size from 430 liters (15.2 cu-ft) to 1,246 liters (44 cu-ft) when they were folded down. 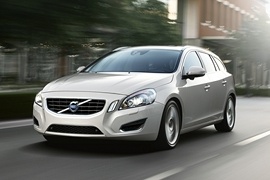