After Volvo broke the chains with Ford, it started to dream better and evolve to a different level.

It was more focused on safety and ecological cars. But the Polestar versions were its spoiled offsprings.

When you hear the expression “bring everything you got,” you might think of a drama or action movie. For Volvo, that was what the new management told the motorsports department. And the engineers from there brought all they got and put it into one car: the S60 Polestar. It was the car that Volvo could do it a long time ago, but they were assigned to stick with the safety leader badge, not the sport one. But Polestar was something else. It was a small racing team acquired by Volvo in 2015, and the S60 Polestar was their first product under the roof of the Swedish carmaker.

For starters, the designers gave more stance to the midsize Volvo sedan by adding a new lip-spoiler, a trunk spoiler, and a diffuser under the rear bumper. A pair of big exhaust was far from any ecological statement but quite convincing for anyone who wants to go faster. To complete the image of the bad guy of the family, Volvo installed 20” light-alloy wheels.

Inside, the Polestar version was similar to its S60 siblings, but it featured a different trim on the center console, which featured carbon-fiber accents. Its bucket-seats with high bolstering had blue stitching, the official color of the Polestar.

Under the hood, the engineers installed an inline-four engine with a supercharger and a turbocharger. Power went into all four corners via an 8-speed automatic gearbox. 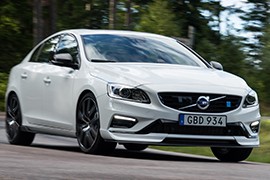 2 "Hot Wheels" Turns Cold Aiming for Nines on the Quarter-Mile, Breaks Diff off the Line

4 Top Carmaker Releases the Chip Announcement Everybody Was Waiting For