4 I Was Wrong About the Volvo EX90, But Volvo May Wish I Wasn't

5 Volvo EX90 Configurator Goes Live: We're Building Our Own and It's Not Cheap

The Swedish automaker was under Geely's umbrella when it started reinventing itself after a few long and painful years spent in the same boat with Ford. Then, with Chinese funding and Volvo's engineering, things started to move in a better direction. Thus, after a few electrified models, the automaker launched a new brand, Polestar, and then new electric models, such as the EX90.

Sporting a clean front fascia design, the SUV looked different than other car manufacturers. There was no grille but a plastic panel crossed by Volvo's logo and its traditional diagonal line. The LED headlights resembled the "Thor hammer" styling, continued on the lower bumper's sides by six light blocks. From its profile, the SUV resembled the XC 90, while its sculptured doors had similar creases on the bottom of the doors as the XC 40. Finally, at the back, the angular styling used for the taillights was also very Swedish. In addition, the LED lights from the D-pillars matched the pattern of the front DRLs.

Inside, a luxurious yet clean design surrounded the occupants with a relaxed atmosphere. There were around 50 kilograms (110 lbs) of recycled materials inside. The design team installed a small screen in front of the driver for the instrument panel, accompanied by a massive 14.5" portrait-type touchscreen on the center stack. It used the floating design theme but didn't look like it was placed there by accident. For the front occupants, Volvo installed its unique-designed seats with active headrests. At the same time, three passengers could share the middle row. Finally, two more extra seats were added in the trunk area. 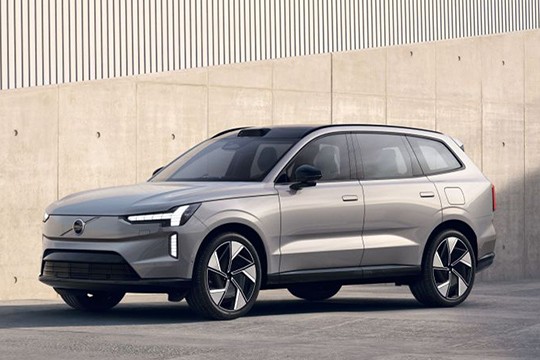