2 Marvel’s 'Ant-Man and The Wasp: Quantumania' Gets Electrified by Volkswagen

5 Volkswagen Allegedly Changed Its Lead Designer Because of Styling Preferences

The sixth generation of the Transporter was launched in 2015 and it is the most successful commercial vehicle in Germany. The previous generation sold in 2.0 million units. The classic design remained almost the same. It is hard to change a vehicle that knows that in some parts of the world the LCV's are called "transporters" regardless of the brand.

It is hard to decide either it is a new or a facelift vehicle since the engines, interior, and safety features are new. But the platform remained the same.

Even if other vehicles from the VW brand have 2.0-liter turbodiesel engines, VW Commercial Vehicles installed a specially developed unit for themselves. It is available in various power outputs ranging from 82 hp to 204 hp. For the gasoline market, the Transporter is available also with a 2.0-liter TSI, which delivers either 150 hp or 204 hp.

Transmissions offered are either 6-speed manuals or 6-speed DSG (dual-clutch) automatic. It is available as FWD or AWD (4Motion) and the latter may be equipped with Hill Descent Control.

Inside, there is a new interior with new materials and a new infotainment unit. A new trim level was introduced, named Highline. The name was carried over from the Volkswagen Passenger range and represents the highest trim level for VW automobiles. The german concept of "forms follows function" worked in the Transporter. Even if it doesn't have the same nice look of other MPV's on the market, everything is very neat and clean, in a Bauhaus design manner. 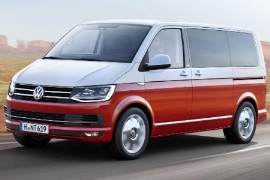