1 VW's Scout Electric Off-Roaders Might Get Built by Foxconn, With Magna Also in the Cards

2 The New VW Scirocco Could've Looked Like This, if Most People Weren't Into Crossovers

Using the same power units as some of its bigger brothers from the "R" family, the Volkswagen T-Roc R is an unexpectedly funky appearance in an other otherwise rather bland sea of modern Volkswagen crossovers. By far the most powerful small CUV in the VW lineup, the T-Roc R also looks the business, not really taking the unassuming look like some of the other "R" models in the Volkswagen stable.

Its turbocharged, 2.0-liter four-cylinder engine develops a more than adequate 300 horsepower and no less than 400 Nm of torque. Paired as standard with a 7-speed DSG double-clutch transmission and 4Motion all-wheel-drive, the unit is capable of accelerating the T-Roc R from 0 to 100 kph (62 mph) in just 4.8 seconds, while the crossover's top speed is electronically limited to 250 kph (155 mph). Volkswagen doesn't seem to have cut any corners when it comes to equipment either, with the model being available with various driving assists elements, including Traffic Jam Assist, Rear Traffic Alert and Front Assist Autonomous Emergency Braking. Somewhat surprisingly and definitely unlike older R models, the electronic stability control (ESC) system cam be deactivated by the driver. Insider there is an 8-inch TFT touchscreen as a standard feature, and it can be paired with the optional multi-color Digital Cockpit found in other VAG models. 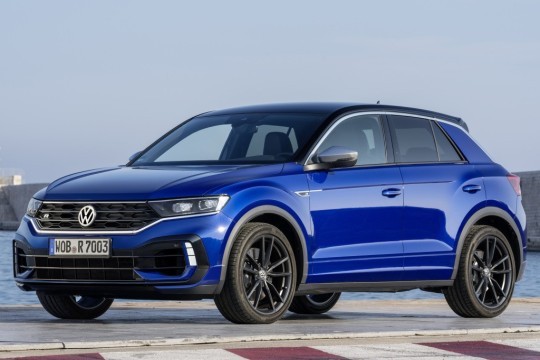