1 VW's Scout Electric Off-Roaders Might Get Built by Foxconn, With Magna Also in the Cards

2 The New VW Scirocco Could've Looked Like This, if Most People Weren't Into Crossovers

In 2005, all the European carmakers had to switch to Euro 4 emission standards, and Volkswagen improved its entire lineup, including the three-door Polo.

Slightly larger than the Golf's first generation, the three-door Polo was a solution for crowded cities. It relied on the PQ24 platform, which it shared with the Seat Ibiza and the Skoda Fabia, to name just a few. But it wasn't a cheap car anymore. It was still economical, but not cheap. Sometimes it needs a trained eye to see the differences between a facelifted and a non-facelifted version of a car. Not in this case. The 2005 Polo (Typ 9N3) dropped the Lupo-like dual round headlights favoring the style from the EOS coupe-cabriolet. Their outer side was rounded and emerged into a narrower, angular-shaped inner side. From its side, it revealed the turn signals enclosed in the door mirrors, a first for the Polo range. The rear side windows were wide and fixed, but most versions featured a standard air-conditioning unit.

Inside, the carmaker made less visible changes, depending on the options, but increased the materials' quality and introduced new steering wheels and gear-knobs. The infotainment unit was enhanced and offered Bluetooth connectivity and a navigation system, depending on the options. There were new, sport-inspired steering wheels available, with three spokes. Its three-door version was fit for those who didn't need the back seats other than short trips, but its split-folding rear bench expanded the trunk space from 270 liters (9.5 cu-ft) to 1,030 liters (36.4 cu-ft).

Under the hood, the carmaker offered a very wide engine choice, starting with a refreshed 1.2-liter gasoline engine and ending with a punchy, 1.9-liter 130 hp turbo-diesel unit. Depending on the options, it was available with a five- or six-speed manual or automatic transmission. 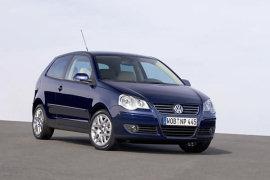