After selling more than 17 million Jetta/Bora/Vento models around the world, the seventh generation of the compact sedan from Volkswagen was introduced at the 2018 North American Auto Show.

It was the seventh generation for the Jetta and, as usual, it was based on the same platform as the Volkswagen Golf. That time, it was the MQB platform, which was also used for various vehicles from the German car manufacturer, including for compact and medium-sized SUVs.

The exterior looked similar to its larger brother, the Passat. The three horizontal chromed lines from the grille made the car look wider than it actually was. More additional lines like those were found in the lower part of the bumper. From the side, the Jetta featured another side window behind the rear doors, which was something unseen on this model before. In the back, the long taillights looked somehow similar to those found on an Audi A4 sedan.

The interior of the car was roomy enough for five adult passengers, with enough leg and headroom for the side passengers and limited foot space for the middle one. For the driver, there was a TFT display for the instrument cluster and a large 8” infotainment touch-screen on the same level with the steering-wheel, tilted toward the driver that was offered as an option. The standard unit was a 6.5” display. It was Android Auto and Apple CarPlay compatible.

From the technical point of view, depending on the engine, the Jetta featured a torsion beam suspension in the back and McPherson in the front. The base trim was offered with a standard 6-speed manual and an 8-speed automatic was optional. All the other trims got the latter one fitted as standard. 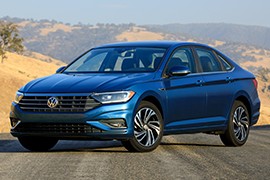