The Jetta reached its 5th generation when it was launched in 2005.

The first Jetta ever built saw the light in 1979.

The Jetta was unveiled at the Los Angeles Auto Show and with the new launch, Volkswagen decided to sell the model worldwide under
the nameplate of Jetta, rather than the different nameplates that were given for different market (Bora in Mexico, Sagitar in China and
Vento in Chile).

The exterior design was refreshed with the chrome radiator grille.

The Jetta was available with 3 trim levels: Trendline, Comfortline and Sportline. No base version was available for the model.
The 1.6-liter Trendline offered semi-automatic air conditioning, ESP, 6 airbags, active front head restraints, power windows, heated door mirrors and others.

The power of the engines mounted on the Jetta ranged from 102 hp to 200 hp. The available engines were 4 gasoline and 3 diesel options.
A sporty DSG double-clutch gearbox was available for the Diesel engines and the 2.0-liter gasoline.

Compared to the Bora, the Jetta was longer, wider and taller. The wheelbase was increased with 6,5 cm and the rear passengers would be the ones to enjoy the change, with more legroom available.

The new Jetta was equipped with standard LED taillights that provided better illumination. 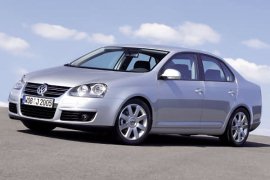