In 2002, the British carmaker TVR introduced a more brutal coupe named T350 in two versions: a coupe or a targa, the latter being named T350 T.

TVR built the T350 T on the same platform as the Tamora, which used the underpinnings from the Tuscan, but with a different suspension setup and brakes. The carmaker carried over these changes to the T350 T, but they added a closed bodywork.

The British carmaker made a long and slanted nose, without a visible bumper at the front, but with a wrapped-around body area that comprised two side scoops. Its hood sported an arched vent and two powerdomes above the front-mid-mounted engine. The cabin featured a raked windshield and a sloped-down roof followed by the rear window. It looked like a hatchback, but only the rear glass area could have been opened. On the roof, TVR installed two removable panels separated by a longitudinal bar.

Inside, TVR installed a leather-clad interior with aluminum stalks and buttons. There were no plastic switches. The only plastic bits were for the CD player mounted into the center stack. On the instrument panel, the carmaker placed white dials with red needles. Behind the front bucket seats, the T350 T featured a panel that separated the cabin from the luggage area.

Under the hood, the carmaker installed a straight-six engine with a 3.6-liter displacement. It provided 350 hp, and it was paired to a five-speed manual gearbox. A more powerful version, named 350 S, provided additional 30 horses to the same engine. 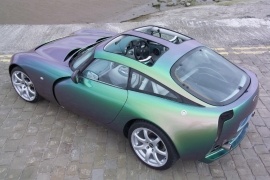