TVR introduced the Chimaera in 1992, and it was built using a classic British recipe: engine at the front, power to the rear, two seats, and an open sky above.

Unlike many other roadsters built in the UK, such as the Lotus 7, the Chimaera was not an affordable vehicle. Moreover, it featured a Rover-sourced V8 powerplant that offered a fantastic sound in addition to its performances.

Its timeless design made the Chimaera a classic car, loved by anyone who drove it. Its round headlights and the lower-mounted air-intake to cool the engine were also part of the design culture of the British carmaker. In addition to that, a set of tiny air-inlets adorned the side of the front bumper, under the turn signals, to get some air to the front brakes. With its long hood and raked windshield, the roadster offered a sportscar appearance but with a flair of exclusivity. Its waved-shaped sideline was not precisely a coke-bottle design, but close enough. At the back, the carmaker installed four lamps under a lens, in a unique design not met on any other car.

The leather-wrapped interior offered a luxurious experience for the driver and the side passenger. An expansive center console divided the cabin into two distinct areas, while the elongated dashboard sported genuine wood trims and six dials.

Under the hood, the carmaker installed a 3.5-liter V8 from Rover but later on, it replaced it with a 4.0-liter powerplant from the same source. The manual transmission was the only option available. 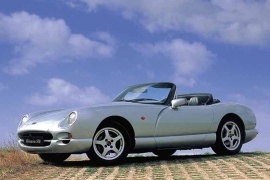