At the beginning of the '80s, the British carmaker TVR tried a bold approach on the sports cars market and introduced the so-called Wedged Series starting with the Tasmin and continuing with the 280i and 350i.

The era of round shapes was gone. New sports cars from Porsche, Lotus, Aston Martin, and Ferrari showed flat panels and angular shapes. TVR already worked on a project with Oliver Winterbottom, who penned the lines of the 1976 Lotus Eclat. The result was the 1980 Tasmin continued from 1983 by the 280i and 350i in both shapes: coupe and convertible.

With a front end narrow enough to be considered a lawnmower, the 1984 350i convertible featured a pair of pop-up headlights and a slim rubber stripe across the car's width. The carmaker made a new design for the hood with two wide vents instead of ten narrow ones. Between them, on the bottom of the raked windshield, the British manufacturer added an air-intake. A pair of chromed pipes poked through the bottom of the rear apron.

Inside, the cabin didn't get the same attention to detail as the exterior. The glove box still featured exposed hinges similar to those from a kitchen cabinet. Its bucket seats featured some bolstering but not as high as on other sports cars. Its leather-clad interior was adorned by a wood veneer-covered dashboard and thick carpeting. Unlike the previous Tasmin range, the 1984 model featured re-arranged buttons for the power windows on the center stack instead of the center console and a new sound system.

Even though the car was still available with the Ford 2.8-liter V-6 powerplant, the carmaker built it with a Rover-sourced 3.5-liter V-8. TVR paired both of them with a five-speed manual that sent the power to the rear wheels. 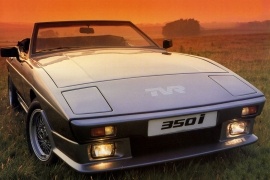