Toyota unveiled the third generation of its largest SUV, the Sequoia, at the beginning of 2022 and built it on the same platform as the rugged Tundra pickup truck.

Introduced more than two decades ago, in 2000, the Sequoia heralded Toyota's entry in the same league with the Ford Excursion and Chevrolet Tahoe. In 2007, the Japanese carmaker introduced the second generation of its flagship SUV, apart from the Lexus brand. But it took another 14 years to launch a completely new model.

At the front, the car shared the main panels with its pickup-truck sibling, featuring similar headlights and a massive grille. Under the fat bumper, an aluminum-like shield protected the vehicle's underbelly. From the side, the biggest Toyota SUV from its 2022 lineup boasted a straight line that emerged from the hood to the D-pillar in the back. Its enlarged wheel fenders and quarter panels evoked a stronger presence. The carmaker suggested that it might resemble a sumo warrior.

Inside, the Sequoia offers room for up to eight passengers on three seat rows in a 2-3-3 configuration, depending on the options. For the interior, Toyota installed a dashboard similar to the Tundra's, albeit it added the trim level in front of the passenger and ambient lighting, depending on the version. In addition, a 14" touch-screen dominated the upper side of the center stack and provided Apple CarPlay and Android Auto connectivity.

Since it was based on the same platform as the Tundra, it featured a fully independent front suspension and a five-link in the back. The drivetrain offered a hybrid system that sends the power to the rear wheels or in all corners, depending on the trim level. 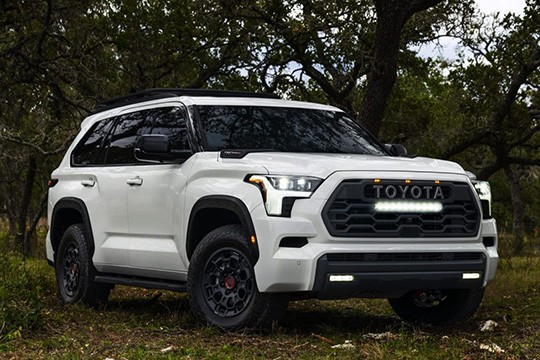