After eight years on the market, Toyota updated its fourth generation of the Land Cruiser/Prado on the market with new engines, new interiors, and new technological features.

The Land Cruiser was considered one of the best 4x4 vehicles in the world. Its success relied on its ruggedness, reliability, and ability to go anywhere from the South Pole to the North Pole. It was the vehicle used to explore uncharted territories on Antarctica and cross Iceland.

From time to time, a car company builds a good vehicle that it is hard for them to replace it. Vehicles such as Volkswagen Beetle or Mercedes-Benz G-Class are just a few examples. The Land Cruiser was in about the same situation. The facelifted model added a new grille design, but the headlights remained with halogen lamps and LED for the daytime running lights. The front bumper peak was lifted to improve the car's image and pedestrian protection as well.

The design team worked on the interior to redesign the dashboard and the center stack, installing an 8" color multimedia screen. The climate control commands were flush to the center stack. The carmaker installed heated and ventilated seats for the driver and the front passenger, offered as an option. Inside the instrument cluster, a 4.2" TFT color display showed the driving, vehicle status, audio, driver assistance systems, and the navigation system.

Under the hood, the Land Cruiser Prado featured a revised version of the 2.8-liter turbodiesel engine. It offered 168 hp instead of 177 as its predecessor. The other three gasoline engines were offered, depending on the market. For the off-road systems, Toyota kept the 4x4 on-demand system with a locking rear differential. 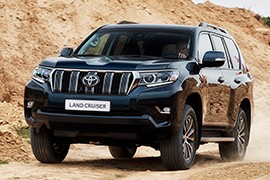