Toyota unveiled an unexpected contender on the hot-hatch market in 2022 when it unveiled the GR Corolla, a car that shared its DNA with rally cars.

Toyota once dominated the World Rally Championship with the Corolla WRC. Unfortunately, they were cheating and got caught. More than two decades later, they revived the hot-hatch version of the famous Corolla family, sharing its underpinnings with the smaller GR Yaris.

The Japanese carmaker sold over 50 million units of the Corolla before introducing the hot-hatch version in 2022. The twelfth generation was introduced in 2018, and while most of its versions were bland and just regular vehicles, the GR version was a different kind of animal. Its widened fenders and quarter panels offered an image of a sumo warrior, while the front fascia with the black grille on the apron confirmed that it was not a regular grocery getter. A pair of functional vents behind the front wheel-arches allowed the air trapped inside the wheel-wells to escape and lower the front lift. At the back, a big wing adorned the tailgate, and it was also functional, not just for the look. To complete the image of an aggressive sports car, three exhausts poked through the rear diffuser.

Inside, the car took some parts from the regular Corolla, but the Alcantara-upholstered sport seats with high-bolstering were specific for the GR version. The metallic covers for the three pedals setup were also inspired by the motorsports arena. Still, Toyota offered the car with rear seats on a bench, fit for two adults.

Under the hood, the GR Corrolla carried over the powerplant from the GR Yaris. The 1.6-liter, turbocharged, three-cylinder unit offered 300 horses on tap, which were sent in all corners via a six-speed manual gearbox, which was the only available option. 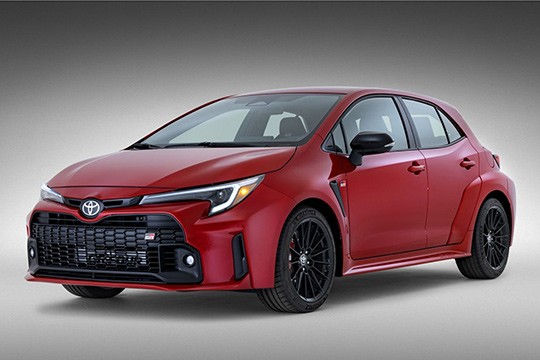