Toyota revolutionized the Crown nameplate with the introduction of the 2023 model year in 2022 and brought it back into the U.S. after 50 years.

Toyopet was the first Crown sold by Toyota in the U.S. from the late '50s until 1972. Still, it continued to use the nameplate for its most luxurious vehicles in Japan. But fast-forward half of the century, and the Crown nameplate returned as a modern vehicle, with a half-SUV presence and plenty of standard features.

Built on top of Toyota's global architecture, the GA-K platform, the Crown impressed with its unusual height for a luxury sedan. Its front fascia featured a wide lower mesh grille flanked by two air intakes to cool the brakes. A lower lip spoiler gave the car a sportier look, even though Toyota didn't offer the Crown as a sports sedan. The slim LED headlights fitted as standard, and the waved beltline created a strong image for the vehicle. At the back, the trunk opened wide, albeit it was not that tall since it didn't open together with the rear windscreen.

Toyota offered an elegant yet functional interior with a standard eight-way adjustable driver's seat. Moreover, both front bucket seats came equipped with heating. The dashboard was designed in a minimalist concept, with a clear horizontal line. Above it were the instrument panel and the 12.3" infotainment touchscreen placed under the same glass, offering the illusion of a seamless horizontal screen. In the back, there was enough room for two passengers on the split-folding (60/40) bench.

The carmaker offered the Crown a choice of two hybrid powertrains named HYBRID MAX, with gasoline-powered engines of 2.4 and 2.5-liter, respectively. Power to the front or in all corners via either a six-speed automatic or an electronically-controlled CVT. 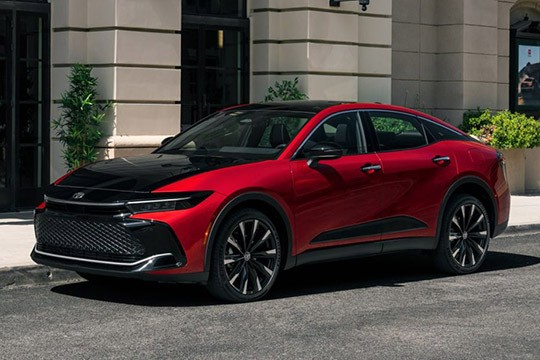