The Camry was on its eighth generation in 2021 when Toyota introduced a new hybrid version for its mid-size sedan in the U.S., improving its fuel efficiency even more.

Toyota Camry was known as America's favorite mid-size sedan. Besides its reliability and comfortable ride, fuel efficiency was also one of its main qualities. Apart from the inline-four and the V6 engines, the hybrid version proved very appealing to customers, and it has done that since 2006 when the Japanese carmaker introduced a hybrid drivetrain for it.

As expected, the 2022 Camry Hybrid shared its bodywork with its non-hybrid Camry sibling. At the front, the wide V-shaped fascia comprised the swept-back headlights and a slim grille with a body-colored trim that supported the chromed badge. In the lower bumper, the carmaker added a trapezoidal-shaped grille. However, unlike the rest of the range, the Camry Hybrid received a set of unique 18" black wheels and a shark-fin antenna. In addition, it received specific badges, door-mirror caps, and handles.

Inside, Toyota offered a choice of 7- or 9" screens for the infotainment system, mounted atop the center stack in a floating position. Finally, the instrument cluster received a wider TFT display placed between two round dials. The front seats benefited from heating and cooling, while the rear bench was just standard as in any other Camry.

Under the hood, the automaker installed the THS II (Toyota Hybrid System II) for the Camry, combining the power of a 2.5-liter four-mill engine and an electric motor. The former provided a maximum of 176 hp while the latter offered 118 hp for a total output of 208 hp. In addition, the entire system was paired with an ECVT that mimicked a six-speed sequential gearbox with paddle shifters behind the steering wheel. 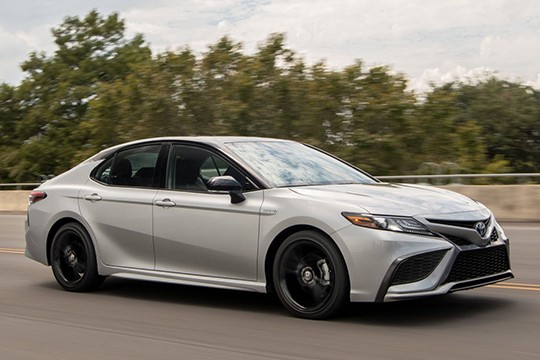 2 Toyota Finally Says “Do Svidaniya” to Vehicle Production in Russia