The all-new Subaru WRX made its world premiere at the 2013 Los Angeles Auto Show being held at the Los Angeles Convention Center. Reigning in the intense power and superior environmental friendliness of the 2.0-liter Horizontally-Opposed direct injection turbo "DIT" engine with a body and chassis thoroughly stiffened, the new WRX has drivers rejoicing at the free reign they have over this high-powered machine. Also,along with the standard six-speed manual transmission, Sport Lineartronic has newly been adopted to the transmission. In addition to smooth shifting mode, the Sport Lineartronic comes with an eight-speed manual shift mode with sharp shifting response, allowing more drivers to enjoy a spirited drive. Equipped with a Symmetrical AWD (All-Wheel drive) system built around Subaru's Boxer engine, the WRX is the symbol of Subaru AWD sport performance. Ever since the first model hit the streets back in 1992, the WRX has gained worldwide support from sports car enthusiasts as a distinctive sports sedan combining impressive sport performance with the practicality of a four-door sedan. 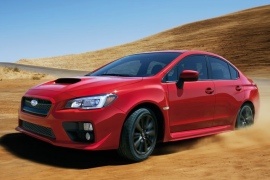