Subaru introduced the Impreza lineup in 1992 as a replacement for the Leone, and like its predecessor, it built it as a station wagon as well.

The carmaker finally decided to use the Legacy platform for a smaller, compact-segment vehicle like the Impreza. It also to dropped the wedged shapes from the early '80s and switch to the rounded shapes of the early '90s before the biodesign trend. But it did even more.

For the Impreza Wagon, the carmaker tried to keep as many common parts with the sedan. That wasn't an easy task since the car didn't have rims for the side windows. At the front, it kept the narrow fascia with slim headlights and grille. Since the engine was flat, it made a lower profile for the hood and a taller bumper which integrated an additional grille. In the back, the Impreza Wagon featured a raked-forward tailgate, which was parallel with the C-pillars. It lost something for the trunk space but won more points on the aspect side.

Inside, the carmaker installed a functional and simple interior with a minimalist design. Its dashboard featured a rounded instrument cluster and a center stack with the climate control dials on the upper side and the radio on the lower part. Depending on the trim level, the car featured an AC unit and radio cassette player. The cargo volume ranged between 357 liters (12.6 cu-ft) with all the seats up and 1,755 liters (62 cu-ft) with the rear bench folded.

Under the hood, Subaru installed a small range of flat-four engines ranged between 1.6- and 2.0-liter, depending on the market. Later on, a turbocharged flat-four was added to the range. The base version was available with a front- or all-wheel-drive system. 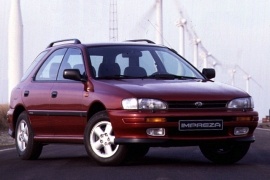