After ditching the Tribeca nameplate from its biggest SUV, Subaru introduced the Ascent on the market in late 2018, and in 2022, it unveiled the facelifted version for it.

When the Japanese carmaker introduced the Ascent, it started on the wrong foot. After a few recalls and repairs, the customers were enraged, but that didn't stop Subaru from pushing harder and improving the product.

One of the most important areas improved by Subaru for the 2022 Ascent was the front fascia. This received a horizontal slat that crossed the car from left to right at the upper side of the grille. Therefore, the new LED headlights received a new, C-shaped design, emphasized by two daytime running lights inside the headlamps. Depending on the trim level and options, that horizontal slat was chromed, black, or body-colored. At the back, the taillights also followed the same C-shape, replacing the older, ovoid-shaped ones.

Inside, the carmaker installed a standard 11.6" touchscreen, portrait mode, on the center stack for the entire range, regardless of the trim level, with wireless Android Auto and CarPlay. Moreover, as an option, Subaru offered a Harman Kardon sound system that integrated voice controls for the front passengers. Another feature supported by this new screen was the Bird Eye-view option that showed the car viewed from above and the surrounding area.

The 8-seat Ascent was powered by the same 2.4-liter, turbocharged, flat-four engine that sent its power in all corners through Subaru's Lineartronic CVT. 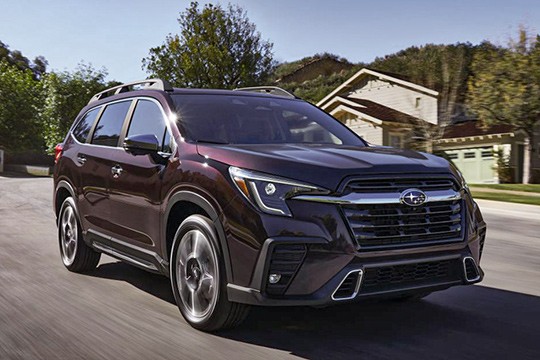