SMART introduced a facelifted version for the ForTwo cabriolet in 2010 and enhanced the vehicle in all areas, starting with the exterior look and ending with the revised engines.

While it had a troublesome start, the SMART project was pushed forward by Mercedes-Benz even when it was losing money on every car sold. Slowly, the smallest car on the market managed to survive and became a fashion item, especially in the open-top version.

The facelifted version received a modified front fascia, with an option for LED daytime running lights in the lower apron. SMART offered the car in seven body colors, one more than on the previous model, and included a mat-finish look. Like in the 2007 model, the owner could have removed the door beams' upper side to uncover the vehicle completely. The carmaker added a choice for three 15" light-alloy wheels for the range.

Inside, SMART installed a full-fabric covered instrument panel with the new styling. The carmaker also introduced a new display at the bottom of the wide speedometer. For the infotainment system, the ForTwo received a 6.5" touch-screen on the center stack with navigation, fitted as an option. But even the base model received USB and AUX-in ports.

Under the hood, SMART upgraded the engines to increase the fuel-efficiency. Apart from the diesel version, which provided minimal CO2 emissions, the carmaker introduced the mild-hybrid gasoline units. 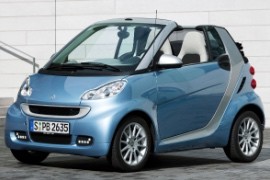