The smallest car built by Mercedes-Benz was SMART. The car was produced to cope better with traffic congestion and lack of parking spaces in the European cities. An electric version was introduced in 2012.

The SMART was a purpose-built vehicle. It had to be short enough to be parked perpendicular to the curb and still offer two seats and some trunk for a couple of briefcases in the back. The idea was good and even if the first generation was a big loss for the German car-maker, the project moved on. The electric version was introduced in 2012 and for some, it was the right answer to the same question about price/distance problem.

The design was very similar to the regular SMART ForTwo model. The same short front end with the tiny wheels just inches away from the license plate and a hood that couldn't be opened. The honeycomb grille in the front was just for design purposes since the car didn't have a radiator. In the back, the small tailgate was opened in a split-way fashion and in the lower lid, the car-maker placed the charging cord.

Inside, there was the same SMART ForTwo interior, but with new gauges installed on top of the dashboard. They showed the charging status so the driver won't be left without batteries.

As an electric vehicle, the SMART EV used a 96 hp electric motor placed in the rear, like the gasoline versions. The 17.6 kWh battery pack was stored under the floor, in the same space occupied by the gas tank in the gasoline-powered SMART ForTwo. 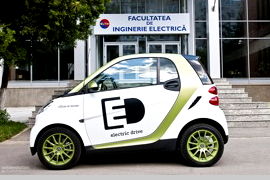