After the concept car unveiled to the public in 2009, the Scion iQ went on sale in the spring of 2011.

The micro subcompact vehicle was a good rival to the Mini Cooper and the Smart Fortwo, having about the same width as the Mini, but taller.

Although considered a 3+1 seater, adults in the rear seats would not have that much space. Otherwise, space wise, both legroom and headroom were a great size in the front, even if the vehicle looked tiny from the outside.

Inside the cabin, the iQ offered an unexpected interior design, with good quality materials.

The 1.3-liter 4-cylinder engine was mated with a CVT transmission and offered a great fuel consumption. The engine developed 90 hp and was more powerful than the one mounted on the Smart Fortwo.

Compared to the Mini Cooper, the iQ was available from a starting price of under $16,000.

Practicality wise, the small car was easy to handle and park around town, however, the load area was almost non-existent. More than 2 adults and luggages was not something to achieve, as the cargo area could be extended by folding the rear seats. 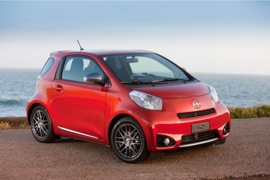