The Renault-Nissan Alliance comprised other brands as well, such as the Korean brand Samsung motors, which was granted to produce the Maxima for their home market with a different name.

Samsung didn't build just phones and TVs. It also made cars, but, in the end, the Korean company understood that it would be best for them to give up and in 2000 sold its car division to Renault-Nissan. Just two years later, the alliance started to work on a new project, and the SM7 was one of their results.

By and large, the SM7 benefited from the two big carmakers' experience, and the result was a sleek-looking sedan. The raked front end with big headlights was followed by an average-sized hood and a greenhouse which looked like an arch toward the sloping trunk. It was appreciated due to the simplicity of its design. It was simple but not bland.

Inside, the carmaker installed a dashboard with a big, center-mounted speedometer. The tachometer was pushed to the left while an LCD was placed at the bottom of the center dial. Some considered it a good-looking one, alas the amber light for it. On top of the center stack, Samsung placed the screen for the infotainment system, while the controls were lower down the stack. Since the Maxima/SM7 was mainly built for the U.S. market, the interior was roomy. Its arched roof provided enough headroom while the long wheelbase offered enough legroom for the rear seat passengers. The front seats were wide, separated by a center console with the gear-selector on it.

Under the hood, Samsung installed two engines taken from Nissan: an inline-four and a V6. Both were paired to an automatic transmission that sent the power to the front wheels. 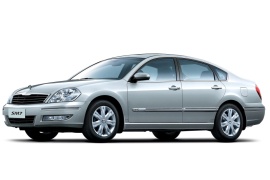