The 2016 RAM 3500 Heavy Duty was not the daily driver that someone would use unless it works on a daily basis with a trailer and a tractor in the back.

But it was one of the hard-workers that never complained.

The RAM 3500 regular cab was all about work. It was a heavy-duty vehicle with the proper chassis, engine, and transmission. It was available as a crew-cab as well, if there was a team needed for the job, but it was hardly a pickup of choice if some would like to go camping unless it needs to tow 14157 kg (31.210 lbs) on a trailer.

For the 2013 model, the RAM removed the “Dodge” badge from it. It featured a new front fascia which, depending on the trim level, could have been chromed along with the bumper. More important was that it featured new transmission and body mounts, including hydro-mounts at C-pillar positions for class-leading NVH characteristics despite the truck's aptitude for higher payloads and towing.

The 2013 model featured a wide choice for the infotainment unit, including an 8.4” screen for the U-Connect system. For the instrument cluster, the RAM 3500 was fitted with a standard 3.5” information center between the round dials, and an option for a more complex 7” TFT screen was available.

Since it was a heavy-duty pickup truck, it featured a reinforced chassis with high-strength steel and eight cross-members between the longitudinal chassis rails. There was a wide engine choice, either gasoline or turbodiesel. The latter was produced by Cummins. It was a 6.7-liter unit but with different power choices. 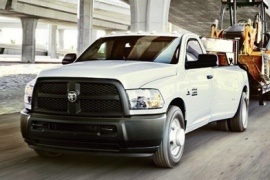