The Malaysian carmaker Proton launched the first MPV from its lineup in 2016 as a rebadged version of the Suzuki Ertiga.

Proton saw a rapid evolution of the small MPV market and decided to get a slice of that with the new vehicle from its lineup. It was the fourth new model in its range in just six months. It lasted on the market until 2018 when the Malaysian carmaker introduced the second generation of the Ertiga.

The Ertiga showed clear signs of connections with the Swift due to the shape of its headlights. The designers imagined a big, tree-slats, chromed grille above the bumper. From its sides, the slightly curved door panels and the flared wheel arches disrupted the vehicle's otherwise bland look. In the back, the Ertiga featured a pair of taillights, which looked inspired by the Corolla hatchback.

Inside, the B-Segment MPV from Proton featured three rows of seats. Since the middle seat from the middle row was fitted with an abdominal belt, it was not considered a proper 7-seat MPV. But the Malaysian carmaker installed that anyway since it knew that it would be used for three passengers. The front seat passengers benefited from legroom of up to 880 mm (34.6"). The middle and the last row offered up to 960 mm (37.7") and 770 mm (30.3"), respectively. That might look good on paper, but it might not be enough if all the occupants were adults. The last row headroom was just 900 mm (35.4").

Under the hood, Proton installed only one engine version, carried over from Suzuki. It was paired as standard to a 5-speed manual transmission, while a 4-speed automatic was on the options list. 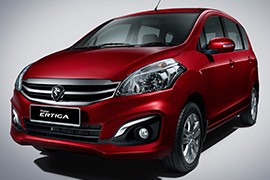