In 1999, Horacio Pagani introduced the Zonda at the Geneva Motor Show and changed the way supercars were seen and built ever since.

Pagani designed the car as a tribute to one of the world's greatest racing drivers, the Argentinian Juan Manuel Fangio. That's one reason why it chose to power its supercars with Mercedes-Benz engines. But besides the engine, it was the car's look. It was just ravishing out of this world.

At the front, the car featured four individual lamps that popped halfway through the fenders. The cab-forward design meant that there was a bigger bubble closer to the front wheels and a sloped rear end. Its cockpit looked like a spacecraft, with a narrower, rounded ending. Its front splitter featured a vertical slat that divided the airflow, like an F1 race-car. The carmaker added two wings on top of the engine compartment lid in the rear. They were not there for the look and actually created downforce. In the back, like a signature for the brand, Pagani grouped four exhausts into a metallic-gray ring.

Inside, the Pagani Zonda S featured an exquisite interior, fit for a car costlier than a Rolls-Royce. There was no airbag for the driver nor fancy infotainment systems. It was a vehicle made for speed, and its high-bolstered seats and the flat-bottom steering wheel confirmed that.

Pagani installed a 7.3-liter, naturally aspirated engine provided by AMG, the sporting division of Mercedes-Benz, the brand that knew the fame and glory with the magnificent Juan Manuel Fangio in motor racing. Only 60 units were ever made. 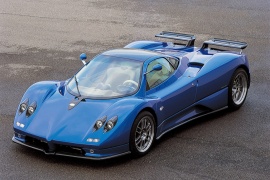