Horacio Pagani unveiled the Zonda at the 1999 Geneva Motor Show, and the result stunned the world with the car's performances and its details.

Four years after introducing the Zonda hypercar, the Brazilian engineer came with a second model: the Zonda Roadster. It unveiled it at the 2003 Geneva Motor Show, and the car manufacturer promised that the open-top version was as fast as its coupe sibling.

He followed the exact design of the coupe version but with some mandatory modifications. At the front, there were the same half-buried four individual lamps on the fenders. Its windshield was pushed forward as much as possible, above the front axle. Unlike its coupe sibling, it featured a carbon-fiber panel that the owner could remove and place in the front storage compartment. Like a signature for the brand, Pagani grouped four exhausts into a metallic-gray ring in the back.

Inside, the Pagani Zonda S featured an exquisite interior, fit for a car costlier than a Rolls-Royce. It was a vehicle made for speed, and its high-bolstered seats and the flat-bottom steering wheel confirmed that. But Pagani didn't think the customers would pay big money for a car only for its performances and made a mix of leather and carbon-fiber interior, adorned by aluminum bits and pieces such as the windows switches from the center console or the center stack front fascia. Behind the seats, the car manufacturer installed the safety arches with integrated Clarion speakers.

Behind the cabin, Pagani installed a 7.3-liter, naturally aspirated engine provided by the Mercedes-Benz sporting division, AMG. The V-12 powerplant sent its 555 horsepower to the rear wheels via a six-speed manual gearbox. And no, the performances were not affected. The roadster version only weighed 30 kg (66 lbs) more than its coupe sibling. 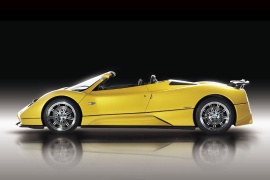