Utopia is a place that doesn't exist, and yet Horacio Pagani created one, but instead of being a country is a hypercar that broke the covers in 2022.

Pagani was no longer a new car manufacturer on the market when it introduced the Utopia since it had already gathered three decades of development of unique vehicles. But if there is one thing that didn't change over that time was the use of Mercedes-AMG engines and the wish to create desirable hypercars that also boasted a luxurious ambiance.

The 2022 Utopia was designed with a hypercar shape, based on state-of-the-art technologies carefully hidden under the beautiful bodywork. At the front, the car featured a quad-headlamp look and a broad air intake that also incorporated the foglamps neatly attached to an aerodynamic horizontal slat. The car's profile revealed the bubble-like greenhouse with a sloped-down roofline. In addition, the manufacturer chose to install a split window on the vehicle's roof, which was quite unusual. Finally, at the back, the quad-exhaust specific for Pagani vehicles exited in the upper mid-section of the rear panel.

Inside, the automaker used only expensive, carefully crafted materials to adorn the cabin. The analog dials from the instrument cluster were separated by a TFT display that showed information from the onboard computer regarding the car's functions. In addition, four other gauges mounted on the center stack displayed the oil's temperature and pressure, the water temperature, and the turbocharger pressure.

Behind the cabin, the Utopia featured a 6.0-liter V12 powerplant built by Mercedes-AMG. The twin-turbocharging system provided 864 hp (876 PS) and a massive 1,100 Nm (811 lb-ft) of torque sent to the rear wheels via a seven-speed manual transmission. 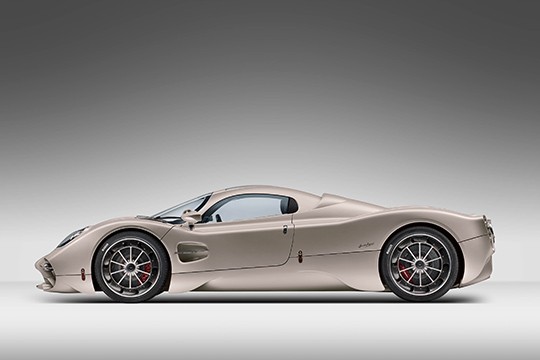