Designed as an affordable compact car, the Tiida/Versa was introduced in 2004 in Japan and three years later it landed on the European soil. It appeared in the North American market in 2008.

The Tiida was based on the Renault-Nissan B-platform, which was used for the Renault Megane in Europe. It was a simple architecture and it allowed the car-makers to offer enough features, plus a five-star rating in the EuroNCAP crash-tests program. But the car came just before a world economic crisis struck.

The exterior design was not the most inspired part of the car. On the front, the hood looked too big, the headlights too small and the three-slats grille was either gray or black with chrome surroundings, depending on the trim level. From the side, the 5-door hatchback offered a more pleasant view, but not enough to enter in a beauty contest. In the back, the leaf-shaped taillights were stretched over the rear fenders.

Inside, the Tiida was very simple on the base trim level. The air-conditioning was fitted as standard from the second level. The dashboard design was not that simple and clean anymore. The center stack, particularly, was crowded with a storage compartment on the upper side, audio controls, and climate unit. The three-round, binocular style, instrument cluster offered the basic info for the driver. The plain seats and flat bench were wide and offered sufficient room for up to five passengers.

The Tiida/Versa was a replacement for both Nissan Sunny and Pulsar. It was fitted with engines ranged between 108 hp and 112 hp. The latter was a 1.8-liter, gasoline engine fitted with a variable valve-timing system built for fuel-efficiency. A diesel engine was on the offer as well, for the European customers. 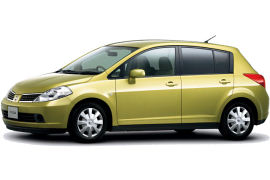