It is a cult-car, the vehicle that made the European sports cars looks outdated. The history of Skyline goes back in time since 1957 under the brand Prince.

Fast forward to 1999 and we found the R34. A car that wrote history in the Skyline R34. A coupe packed with the latest technology on the market and an advanced engine: the RB26DETT. It featured a twin-turbo, individual throttle body for all the six pistons, water-cooled ceramic turbochargers with ball-bearings and the list can go on.

The Skyline R34 had an intelligent all-wheel-drive system with a limited-slip rear differential (LSD), which helped the car accelerate faster on the corner's exits. An important feature of the car was the Multi-Function-Display (MFD) that was mounted on the dashboard. This display showed many of the car's engine stats including boost pressure, oil temp, water temp and more. As a 1999 car, this kind of technology was very rare and advanced at the time.

The stated power output of the engine was 280 hp, as part of a gentleman agreement between the Japanese car-manufacturers to not advertise more power than that. But in reality, the car was dyno-ed at 330 hp. Due to its cast-iron engine block and forged internals, it supported many modifications and some were modified to offer over 1000 hp. 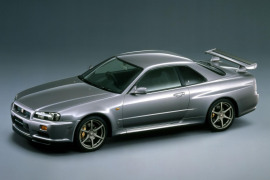