The Japanese car-maker Nissan unveiled the third generation of the Rogue in June 2020.

It was based on the same platform as the European model X-Trail.

Nissan succeeded to become one of the best SUV car-makers in the world. Due to its substantial 4x4 experience combined with it's alliance partner Renault, the Japanese brand offered best-sellers around the world. The third generation of the Rogue was introduced to the North-American market to continue that successful story.

This time, the Nissan's designers took a bold approach when they drew the first lines on the car's front. With a set of lights on top of the front fenders and the main lights placed lower, it was different than the conventional system used before. A big black grille surrounded by a chromed rim enhanced the vehicle's look on the front fascia. The widened fenders and profiled doors gave an up-market look.

Inside, the Nissan's designers placed an in-dash infotainment unit, over the center stack, and it supported Apple CarPlay and Android Auto wireless connectivity. A large storage compartment filled the space between the front seats. The rear bench featured the "Zero Gravity" support and heated outboard seats as an option.

For the drivetrain, the Japanese engineers offered the Rogue with a 2.5-liter gasoline engine paired to a standard CVT. It sent the power in all corners via an intelligent all-wheel-drive system, that allowed a seamless torque-vectoring transfer. 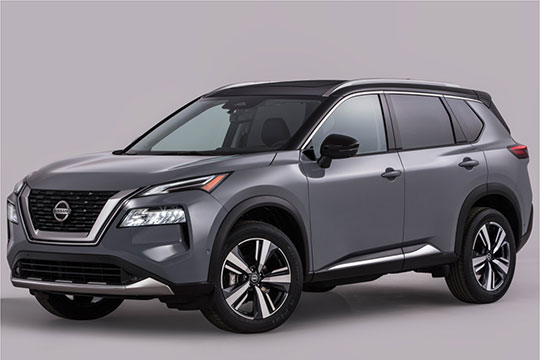