The upgraded Armada was a full-size SUV with a rugged body-on-frame construction.

For 2021, the Armada was highly redesigned, as the previous model had been around for quite some time and started to look dated.

The exterior design changes included a new grilled, a new hood, restyled front and rear bumpers, LED headlights and stoplights, as well as a new exterior color added to the list.

The Armada was fitted with a 5.6-liter V8 engine that cranked out around 400 hp and 394 pound-feet of torque. The thirsty powerplant was mated with a 7-speed automatic transmission.

The full-size SUV weighed around 2.7 tons, however, the 5.6-liter engine handled it really well, with a quick acceleration response. Considering its weight and the size, it’s easy to say that the fuel consumption was no synonym to economy.

Practicality was one of the Armada’s strongest points, as it offered huge space inside. The large SUV could accommodate up to 8 passengers, unless the 2nd row was chosen with captain chairs, which allowed only 7 passengers.

The 3rd row of seats was mostly designed for children, as adults would have felt a little uncomfortable on longer journeys. The 3rd row folded flat to increase the cargo area to around 1400 liters, however, even with the 3rd row up, the Armada still offered more than enough space.

Designed for larger families, the Armada was a safe car, being equipped with the latest safety features available. 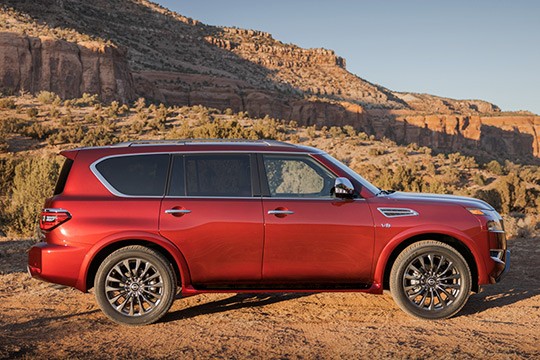