The 1991 Nissan NX was launched on the sport-compact market to fight against Mazda MX3, Toyota MR2, Honda Civic Del Sol, and Isuzu Piazza.

The Japanese car-maker didn't want to lose a slice of that segment, where it had good results with the Nissan Sentra and the Nissan Sunny Coupe. The latter was more of a hatchback than a coupe but so was the MX3. It developed a good platform designed for better handling but still offering good fuel-efficiency.

The car's design was unusual, with deep headlights and an arched cabin shape. The removable top transformed the car into a Targa body style in a matter of seconds. The raked rear end was inspired by sports-cars, with a big rear windscreen on the lift-gate.

Inside, the NX offered a good room for two adult passengers in the front. The rear seats were a folding bench that expanded the trunk room. It didn't offer enough headroom for adult passengers. The instrument cluster featured the basic information for the driver: a tachometer, a speedometer, a fuel gauge, and the coolant temperature.

The NX was one of the best handling cars from its time. It was pitted against vehicles such as the Acura NSX, Porsche 911, and Mazda Miata and it didn't come short. Its main advantage was a limited-slip differential, which was an unusual feature for a front-wheel-drive car. The engine range was limited to 1.6- and 2.0-liter units, which offered between 90 and 143 hp. It was offered with either a 5-speed manual or a 4-speed automatic. 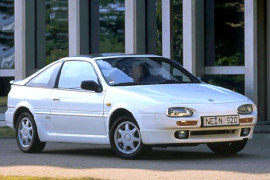