MINI was the first small-class premium vehicle and it kept that advantage for many years until other car-manufacturers entered the competition.

But the British brand succeeded to keep its sparkling image on the market.

MINI grew up and so its customers. This is why it needed a bigger version. That being said, the company engineers stretched a 3-door MINI, shortened the front doors and installed a new pair in the back. The outside look is almost the same, with a short front and rear overhangs and an almost vertical front fascia.

The 2018 MINI 5-doors had the same round headlights that made the car so popular around the world. The grille was kept small. It didn't need a larger air intake since most of the engines were small. For the sportier versions such as Cooper S and John Cooper Works, the engineers installed an air scoop on the hood.

Inside the vehicle, the driver had the same old-fashion look of the dashboard and instrument cluster, but those were updated with TFT screens and a touch-screen display in the middle of the central console. The space in the rear was large enough for three skinny passengers. The trunk was big enough for some shopping, but for a shopping spree, it was necessary to fold the rear seats.

One of the most important features of the MINI was the rear independent suspension that made the car very comfortable for its class, where most of the vehicles had a semi-rigid type. An 8-speed automatic transmission was available for selected models, while the standard gearbox was a 6-speed manual. 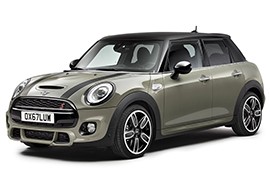