After failing to impose the Maybach as a distinct brand, Mercedes-Benz decided to make it a trim level, which was much more than just some shiny set of wheels and a better plastic inside.

In 2015, the German carmaker introduced the Mayback trim-level available for its flagship model, the S-Class. The result was stunning, and more than 60.000 units have been sold in just five years. It was clear that the idea of an S-Class fully loaded got more traction than a standard Maybach 62.

The 2021 Maybach was 19 cm (7") longer than the long-wheelbase S-Class, and the rear passengers benefited from that additional length. On top of the front grille, with vertical chromed slats, the carmaker placed the Maybach word. But on the hood, there was still the three-pointed star badge. To emphasize the luxurious model, Mercedes-Benz installed the brand's specific triple-M badge on the C-pillars.

But it was the interior that mattered the most, especially the rear seats where Maybach installed Executive seats with more legroom than in a First Class lounge. Also, for the rear occupants, there was a mobile office, refrigerator, and massage seats. To reduce the inside noise, Mercedes-Benz worked together with Burmeister to install an active road noise compensation system.
For the driver, the carmaker installed only digital displays for the instrument cluster and the infotainment unit. 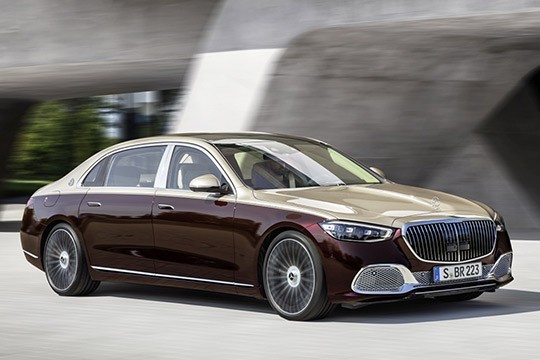