In 1930, Mercedes-Benz introduced the Grand Mercedes as its flagship, the most luxurious vehicle produced by the German carmaker and offered as a four-door open-top vehicle.

Mercedes-Benz was already known for its luxurious vehicles, and, besides the limousines and coupes, it offered convertible versions as well. It was straightforward to do that in the '30s when most cars (except Lancia Lambda) featured a body-on-frame construction. Even though it was a heavy vehicle, thanks to its large engine, it could quickly get up to 75 mph (120 kph), which was considered "breathtaking."

The Cabriolet F was the vehicle used by Kaiser Whilhelm II until his death, and it was indeed a royal vehicle. Its pined-out radiator grille resembled the bow of a battlecruiser. Unlike the rest of the open-top versions, the Cabriolet F had multiple choices to open the vehicle. The driver's area was covered or uncovered independently from the passengers' area. Moreover, the carmaker added a panel and a windscreen between those areas, so the driver couldn't hear the talks in the back.

Also, there were different materials used for the driver and for the passengers' seats. In the back, there was the finest leather upholstery available on the market and natural wood veneers. Since it was primarily built for high-ranking officials, Mercedes-Benz added an option for a handle in front of the rear seats, so the passenger could stand up while waving to the crowds.

Mercedes-Benz installed an inline-eight engine under the long Grosser-Mercedes hood. It was offered with or without a supercharger and offered the possibility to install the blower afterward if the owner considered it. 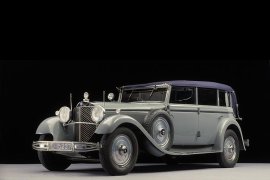 1 1985 Mercedes-Benz Unimog Is the Ultimate Off-Road Camper, Won't Come Cheap at All

2 Ciara and Russell Wilson Visit the Mercedes-Benz Headquarters, Their Kids Get Presents