When BMW introduced the X3 in 2003, Mercedes-Benz didn't have anything to fight against it in the compact luxury crossover segment, but its answer came five years later when it unveiled the GLK.

In 2015, the three-pointed-star brand decided to change the naming system of its entire SUV stable. Thus, the GLK's successor received the GLC name when it appeared on the market. Fast forward to 2022, and the third generation of Mercedes-Benz's luxury crossover made its debut in the summer of 2022. It was built on top of the same MRA platform as the C-Class with independent suspension in all corners.

The 2022 GLC shared the same design language with the C-Class, featuring similar swept-back headlights with an angular inner side and rounded, raised outer side. In addition, the front fascia wore a broad grille fitted with a mesh and a chromed horizontal slat that supported the center-mounted three-pointed-star badge. From its profile, the crossover sported an ascending beltline ended to the raked-forward D-pillars, while the B- and C- posts were blacked-out.

The car was fitted with a luxurious yet sporty interior, and the carmaker offered high-bolstered seats as an option. For the dashboard, Mercedes-Benz installed a 12.3" screen for the instrument panel, while atop the center stack, it mounted a second, 11.9" touch-screen. In addition, a color head-up display was offered as an option. Furthermore, it was fitted with the Mercedes me App that could connect to Android or Apple devices. Moreover, the integrated OTA update systems allowed streaming via the "Online Music" service.

For the drivetrain, the 2022 GLC featured only electrified powertrains with an integrated starter-generator (ISG) on a 48-volt architecture. The car came fitted exclusively with a nine-speed automatic gearbox that ensured smooth gear changes regardless of the engine version. 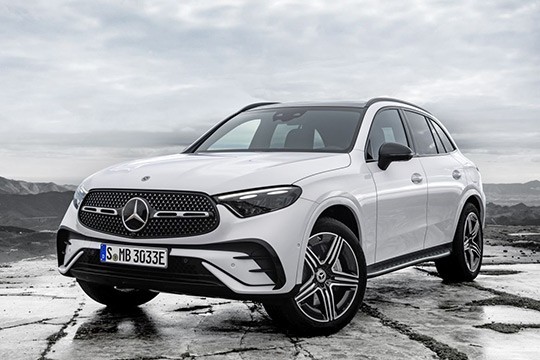