The Mercedes-Benz G4 was a rare vehicle, built only for top-Nazi party members.

It was developed for the German Army, but it was too expensive to be sent on the battlefield.

In the mid-'30s, the Mercedes-Benz started to build vehicles for off-road use. Its evolution started after the 1926 G1 model was developed for off-road and military use. While the G1 featured twin wheels for the rear axles. The G4 received simple wheels. The twin set was not needed for a passenger vehicle.

The rugged appearance of the G4, with its imposing stature. In a closed version, it was 1.9m (6.2 ft) high and it was almost 6 meters (19.4 ft long). The high and long engine compartment was complemented on the sides by curved fenders and a spare-wheel on each side. In the rear, the double axle system was covered by a special, elongated, fender.

The big G4 featured a spacious interior fit for up to seven passengers. It was the vehicle of choice used by the German dictator Adolf Hitler when he went to parades. The models used by him featured a front passenger seat that could be folded up, making it possible for the dictator to stand upright and wave to the crowds.

The G4 started with the G1engine. It was an inline-8 unit that offered not more than 100 hp. In 1937, a bigger 5.2-liter unit was installed and the power increased to 115 hp. Due to the shortage of high-quality fuel, the engine was modified again in 1938 up to 5.4-liter, but the power dropped to 110 hp. Regardless of the engine version, it was mated to a 4-speed manual transmission. The rear axles featured self-locking differentials. 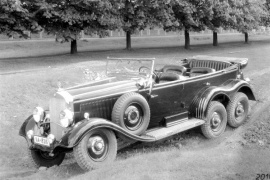