2 Tesla Fans Should Stop Laughing About Drive Pilot, and This Is Why

Mercedes-Benz decided to bring new life into the G-Class and refreshed the lineup in 1989, while in the following year, the carmaker extended the modifications to the open-top version as well.

While the rest of the Mercedes-Benz's range was upgraded to more luxurious standards, the G-Class remained behind as an extremely capable off-road machine. However, its comfort was a far cry behind the rest of the carmaker's range, not to mention the lack of amenities.

For the refreshed lineup, the front fascia received a new treatment with new clusters for the round headlights. The blinkers, though, remained on the upper side of the fenders as before. In addition, its slatted grille was adorned with the carmaker's badge in the middle. At the same time, the bumper was slightly rounded and now incorporated the foglights. Yet, the B-pillar that hid the safety arch was thick. Even with the triangular window enclosed, it was still an obstacle to the driver's visibility.

The interior showed some features carried over from the W124 E-Class, such as the steering wheel and the seats. Moreover, the dashboard followed the same design language as the rest of the carmaker's range. However, there was little legroom for rear-seat passengers due to the short wheelbase. Moreover, the trunk was barely big enough to carry more than two backpacks and a briefcase.

Apart from the new all-wheel drive, which replaced the older part-time 4x4 system, the carmaker added a new engine range. The base model still featured the same sluggish inline-four powerplants, but a 5.0-liter V8 engine powered the top-of-the-range unit. In addition, there were a few turbo-diesel engines available and offered a decent fuel efficiency. Depending on the engine configuration and options, Mercedes-Benz offered the G-Class convertible with a five-speed manual or a five-speed automatic. 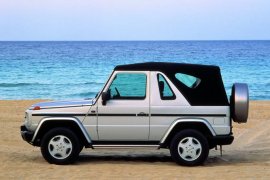