2 Tesla Fans Should Stop Laughing About Drive Pilot, and This Is Why

The G-Class was already a highly-valued off-road vehicle, but Mercedes-Benz thought it could do something better than that when it made the squared version.

In 2015, the German carmaker already knew that its next G-Class wouldn't have the same chassis and solid axles as the veteran G-Class. But its engineers were left to let loose their imagination, and the result was the G-Class 4x4 Squared. A behemoth off-road vehicle taller than any other G-Class ever made.

The G-Class squared was an actual hard-core off-road weapon. It didn't care about anything other than being the tallest guy in the parking lot. But its boxy-looking design penned by a child in the '70s was an evergreen in the automotive industry. This time, the carmaker enhanced it with very wide over-fenders in all corners and an aluminum shield under the engine compartment. It was metallic, not plastic. Its bumper sat high enough to knock a hot-hatch roof, and a roof-mounted light-bar could bring light into the deepest night.

But apart from the rugged, mean exterior, the interior was luxurious and carefully crafted by the German carmaker. Its sport bucket seats featured a mix of leather and Alcantara. In front of the passenger, Mercedes installed a grab handle, very useful in tricky off-road situations. The car could cope, but the occupants had to survive as well. A metallic mesh separated the cabin from the trunk area. Thanks to that detail, the car could have been registered as a utility vehicle in Europe.

Under the hood, the carmaker installed a bi-turbocharged V-8 gasoline engine paired to a seven-speed automatic transmission. Unlike the rest of the G-Class, the Squared version featured portal axles both front and rear. These allowed the vehicle to sit higher on the ground, increasing the ground clearance up to 450 mm (17.7"). Just a quick reminder: it was the highest ground clearance for a production car. Did I mention that it had three locking differential and a high-low transfer case? Well, it had. 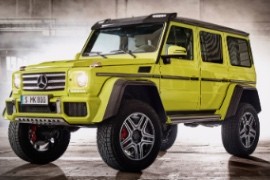