4 Tesla Fans Should Stop Laughing About Drive Pilot, and This Is Why

After successfully launching its new electric vehicles, such as the EQE and EQS, the German automaker stepped up its game in the electric SUV segment, where it already had a saying, but it was not enough.

Mercedes-Benz introduced the EQE SUV to compete against its traditional competitors from its home market, such as the BMW iX and the Audi e-tron. But it didn't rush on launching new models. First, it developed the EQE sedan, and only after that it marched forward with expanding its SUV lineup.

Even though it was shorter than the EQE sedan, the SUV version appeared more commanding due to its height. Moreover, the front fascia showcased a big black flat area on the front fascia flanked on the sides by LED headlights. Depending on the version, the lower bumper featured an A-shaped center grille needed to cool the electronics and the battery pack of the vehicle, and that was flanked by two side scoops that channeled the air onto the sides of the bodywork, reducing the drag resistance. Finally, at the back, the car's profile revealed an SUV shape with a raked-forward rear windscreen.

Inside, the main focus was on the dashboard, where the automaker offered an option for a Hyperscreen that combined the instrument cluster, the MBUX infotainment display, and the third screen in front of the side passenger. In addition, for occupants' comfort, Mercedes-Benz installed a standard heat pump that took the heat from the vehicle's motors and transferred it inside to warm the cabin.

The vehicle was fitted with either one or two motors, the latter being for the all-wheel drive versions, whereas the optional second power unit was for the front axle. But, even the 4Matic models could have the front motor disengaged in normal driving mode to save battery and help the car achieve a maximum of 590 km (367 miles) of range. 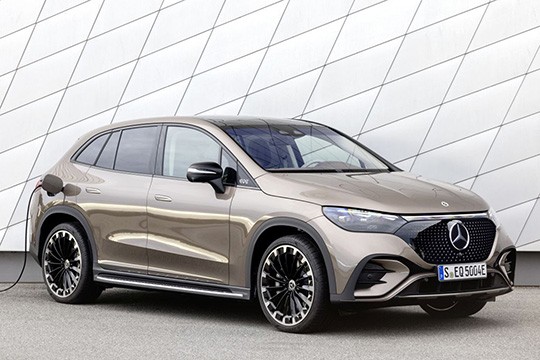