Mercedes-Benz introduced its electric flagship EQS in 2021 and, just a few weeks after its mid-size representative, the EQE.

In 2021, it was obvious that electrification and the electric car had to be part of a brand development. Even though Mercedes-Benz didn’t rush to launch new products, it created surprising products when it did. While the EQS was on par with the price for a regular, IAC-powered S-Class, the EQE came close to its non-electric stablemate, the E-Class. Yet, the EQE didn’t share its platform with that, but with the bigger brother, the EQS.

The carmaker made the EQE energy efficient, which is why it chose to create a different shape for it. Its ascending front side was continued by an arched greenhouse ended with angled C-pillars and the rear window. It was a fluid curve, from front to the sloped, short trunk lid. The car’s front resembled the same front fascia as the EQS, with a closed, black panel instead of a grille flanked by the LED headlights. On the lower side of the bumper, the carmaker added a functional ventilation grille needed to cool the batteries and other electronic components.

Inside, Mercedes-Benz included a Sci-Fi cockpit with three wide displays on the dashboard: one for the instrument cluster, a touch screen as a center stack, and a 12.3” touch-screen for the front passenger. It almost removed any physical buttons, apart from a small group placed on the center console. Unlike its internal combustion stablemate, the EQE featured a second storage area under the center console since no transmission tunnel or gearbox was installed there.

Mercedes-Benz introduced electric motors for the 2021 EQE and offered it with a rear- or an all-wheel-drive system with permanent magnets motors. In addition, a rear-steer axle was available as an option. 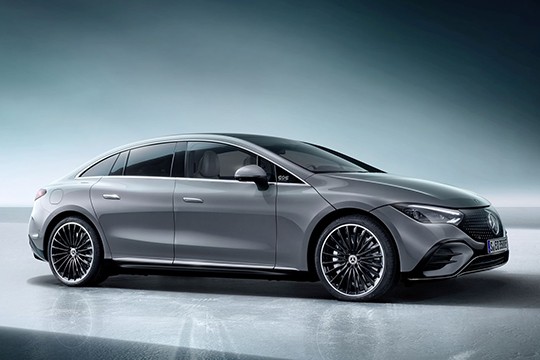