Mercedes-Benz introduced a new electric SUV with seven seats at the 2021 Auto Shanghai, developed and produced in its Chinese factory near Beijing.

The German carmaker announced the EQ range in 2016 at the Paris Motor Show, but it took it another three years to start the assembly lines for the 2019 EQC. It was followed by the EQV minivan and the EQA crossover. Mercedes-Benz also announced that the EQ would be developed as a sub-brand focused on electric vehicles.

Mercedes-Benz already produced the GLB in the Chinese factory, and since it was built on top of the MFA2 platform used for the GLA, it was just a matter of time until it could offer it as an electric vehicle. But on the outside, it looked very similar to its gasoline-powered SUV. The changes included a masked grille since it wasn't needed to cool the engine and new, EQ-style headlights. Its front fascia had an A-shaped lower bumper with a pair of side-scoops. Its boxy profile confirmed the SUV status, while the extended rear area behind the doors confirmed the seven-seat option.

Inside, the carmaker installed a similar-shaped dashboard as in the A-class or EQA. The two screens mounted on the dashboard shared the same glass cover and left the impression of a single unit, but they were different. Mercedes-Benz installed a TFT display in front of the driver and a touch-screen above the center stack. There were three seat rows available, with a tilting and sliding middle row, while the last two seats were folding into the trunk's floor.

The drivetrain featured front or all-wheel-drive variants, with a base 200 kW motor for the European customers, while the Chinese version was available with a 215 kW and an AMG-line trim level. 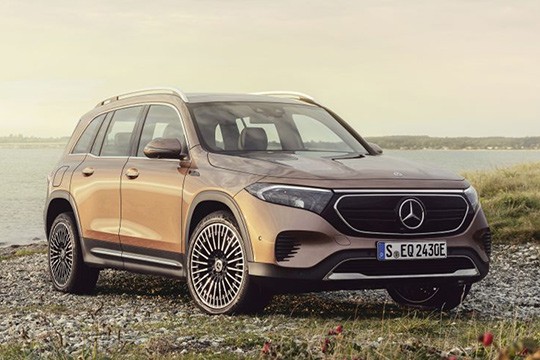