Along with its four-door coupe sibling, the CLA Shooting Brake was unveiled at the beginning of 2023 for the 2024 model year.

The German automaker continued the saga of its CLA Shooting Brake with a well-deserved upgrade that improved the vehicle in all areas. It could've done just some minor aesthetic changes, but instead, it went the whole nine yards.

With this bodywork version, Mercedes-Benz found a way to offer a bigger trunk space and a sleek look to the station wagon variant of the CLA. The facelifted version came with a new 3D grille that sported a horizontal bar. Furthermore, to emphasize the vehicle's sporty character, the lower bumper featured an AMG-inspired A-shaped center grille flanked by two scoops that channeled the air on the side of the car. In addition, the headlights received an LED upgrade and a different pattern. Also, the long roof version featured the same raked-forward tailgate.

Inside, the CLA came fitted as standard with a pair of 10.25" displays, one for the instrument panel and the second, touchscreen, for the infotainment system. In addition, high-seatback seats were installed for the front occupants. Thanks to the long roof, the rear passengers enjoyed better headroom than in the CLA four-door coupe version.

Under the hood, Mercedes-Benz offered a choice of turbocharged gasoline engines helped by a new 48 volts starter generator. While that didn't provide too much power (13 hp), it helped smooth the departures. Power went to the front or all wheels, depending on the version. 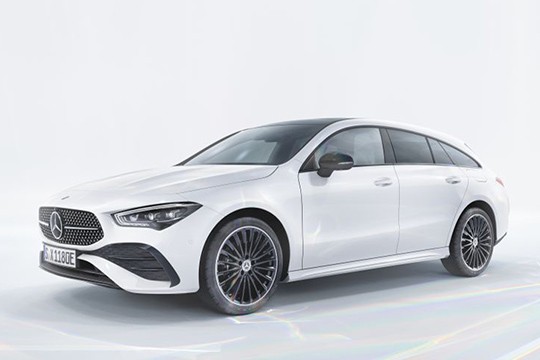