3 Check Out Lando Norris' Very Own McLaren Artura, Which He Himself Designed

4 Nia Long and Terrence J Lived It Up in Dubai, With Beyonce Concert and a McLaren

The McLaren P1 will have the combined force of two highly-efficient powerplants, offering the optimum mix of superb throttle response, day-to-day drivability and top speed. A mid-mounted 3.8-litre twin-turbo V8 petrol engine and a highly effective electric motor give a combined output of 916PS (903 bhp) and a maximum torque figure of 900Nm, ensuring instantaneous throttle response through the rev range, more akin to a naturally aspirated engine. Emissions of less than 200g/km on the combined cycle are reduced to zero in full electric drive mode, while the Formula 1-derived DRS and IPAS technologies offer an increase in straight-line speed and an instant boost of power.

The 3.8-litre twin-turbo V8 petrol engine in the McLaren P1™ is a new version of the familiar M838T unit, that has been significantly upgraded to optimise cooling and durability under the higher loads. The engine block has a unique casting to incorporate the electric motor. The petrol engine produces 737PS (727 bhp) at 7,500rpm, and 720Nm of torque from 4,000rpm. To optimise efficiency of the petrol engine, extensive testing and development work has always been carried out with McLaren Automotive technology partner Mobil 1 on lubrication and hydraulic fluids. 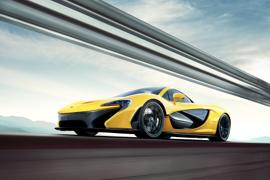