Removing the roof from a supercar might alter its performances, but add more fun into the equation.

But what if there would be, virtually, no performance loss? McLaren did that with the 570S Spider.

When McLaren designed the 570S bodywork, it engineered it in parallel in both versions, as a coupe and a convertible, at the same time. Building the coupe with a carbon-fiber structure and with reinforcements around the cabin and not in the roof, meant that the designers could remove the roof and not alter the car's performances.

From the outside, the 570S spider looks almost like the coupe version, when seen from the front or the side. The panels behind the cabin have the same design as those from the closed version. In the front, the shape of the headlights is the same as the McLaren logo. The same goes for the taillights and the turn-signals. The doors are the same for the coupe and the spider, with the same upward-opening system. The main difference between the two supercars is that the spider can be opened in 15 seconds at speeds up to 40 kph (25 mph).

The cabin was the same as in the coupe, with the same bucket-seats and driver-focused dashboard. Behind them, the shelf was removed and there is the compartment for the two-piece aluminum roof. A glazed wind deflector could have been raised or lowered at the touch of a button, to decrease the wind-buffeting when the roof was retracted. Or it can be lowered for a more “cabriolet” experience. 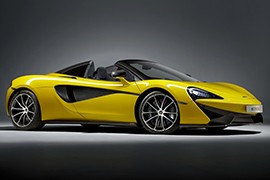