Mazda started introducing rotary engines since the Japanese regulations less taxed them, and the RX3 was an important step forward in that area.

Mazda offered the RX3 as a replacement for the previous RX2 model. It was available as a coupe, sedan, or station wagon. The Japanese carmaker tried to make the vehicle sporty enough to appeal to the younger generation but comfortable and well equipped for young families.

At the front, it featured dual round headlights and a separate grille between them as the original 1964 ½ Mustang. Even if it was way shorter than the famous pony-car, the RX3 featured a sloped rear window, making the car look even smaller. In the rear, the Japanese designers installed another pair of dual taillights, like some other European carmakers.

Inside, Mazda installed vinyl-covered seats with embossed "pleats" and emblems, but with good finishes. The instrumentation was complete with two main dials in the instrument cluster, and four additional gauges mounted high on the center stack. The Japanese designers placed the radio above the HVAC system, which was a much logical solution. Mazda installed a badge in the middle of the three-spoke steering wheel with the rounded triangular shape of a Wankel rotary engine piston.

The 1.2-liter Wankel engine was designed, so the owner paid smaller taxes, and it offered 90 hp. It was an unusually high specific output. Yet, the fuel-efficiency was worse than most of the similar cars on the market. Its live rear axle with leaf springs was unsuitable for a sporty coupe, but at least it featured power brakes with discs at the front and drums in the rear. 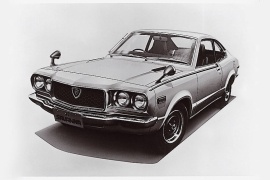