Revamped in 2016 for the 2017 model year, the third generation of the Mazda3 hatchback, also known as the Axela on its home market, is one of the most old-school cars in the compact segment by far.

The main reason for that is not necessarily linked to its sexy exterior design or the level of technology available on the model, but one single feature, releted to what's under the hood.

All the gasoline engines present on the third-generation Mazda3 are naturally aspirated, which makes it a unique proposition. Because they haven't followed the general trend of downsizing and turbocharging but use a clever, the engines in the Mazda3 are still responsive and sound great, while the fuel economy is far better than some might expect. The facelifted sedan version is almost identical to its predecessor on the outside, with the G-Vectoring Control (GVC) system and some interior nips and tucks being the main differences between them. The front and rear light units have also been slightly refreshed. 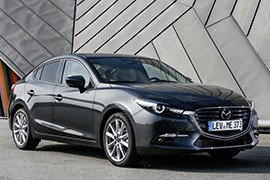